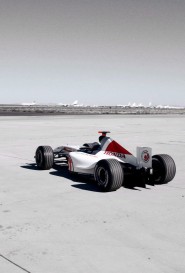 How fast can an F1 car go? That was the question Lucky Strike felt obliged to answer. So, they took a perfectly good F1 car and modified it to ensure straight line stability at high speed. Given the fact the car weighs little more than the screen you’re reading from and the fact almost all drag inducing downforce had to be removed for top speed, this problem was solved by using a kind of ‘rudder’ on the back of the car, which used air to counter unwanted yaw, (Sideways movement). The target was 400kmh and the car almost got there, breaking a number of records in the process.